The International System of Units: Prefixes Added to Base Unit Names

The International System of Units: Prefixes Added to Base Unit Names

The SI measurement system has several specific prefixes (a letter, number or word that precedes another word and gives it another meaning) that prepend the basic units of measure to form new words, thus new units which indicate multiples or fractions of the basic units. So, these prefixes serve as specifiers or mnemonic devices, and they also help make very large and very small numbers easier to understand and work with. The prefixes in The International System of Units are decimal fractions and multiples of SI units and derived SI units.
Each prefix has a unique word and symbol that is added to the basic unit. 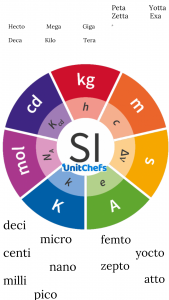 The group of prefixes is universal, simple and easy to use.
Prefixes cannot be combined.

There are seven base units in the SI system:

the kilogram (kg), for mass
the second (s), for time
the Kelvin (K), for temperature
the ampere (A), for electric current
the mole (mol), for the amount of a substance
the candela (cd), for luminous intensity
the meter (m), for distance

Notice how the kilogram is the only SI base unit with a prefix already incorporated as part of its name and symbol. So the kilogram is an odd exception. As multiple prefixes are not acceptable, the symbols for decimal multiples and submultiples of the unit of mass are composed by adding the SI prefix symbols to g, and the name gram. So, a gram is defined as one-thousandth of the SI base unit, the kilogram, or 1×10−3 kg.
Example: 10-3 kg = 1 g (1 gram) but not: 10-3 kg = 1 mkg (1 millikilogram)

“Kilo” is a prefix deriving from a Greek word which means thousand. Antoine Lavoisier’s research group initially adopted it in 1795 and introduced into the metric system in France with its establishment in 1799.
The prefix “milli-,“ likewise, may be added to meter to indicate division by one thousand; one millimeter is equal to one-thousandth of a meter. Milli comes from the Latin word mille, meaning “one thousand.”

“Mega” is metric system unit prefix which denotes (a multiple of or) the equivalence of one million. The word originates from the Greek word which means great.
“Micro” is a prefix that indicates one-millionth fraction.