When it comes to storing wine, size does matter. Wine matures more slowly in larger bottles or vessels. That is probably one of the reasons why there are some giant-sized bottles. For obscure reasons, there seems to be a convention for naming wine bottles and their sizes after biblical kings and other historical figures. The standard wine bottle, generally made of glass measures 750 milliliters (26.40 imp fl oz; 25.36 US fl oz). Yet, there is a variety of other volumes and shapes for wine bottles. Also, they come in different colors which vary from dark green, through medium and light-green to colorless depending on the type of wine they should hold.

Wine volume is a term related to Alcohol by Volume which is abbreviated as ABV or alc/vol. It is a common measure of the amount of alcohol present in any given volume of alcoholic drink and is expressed in alcohol percentage. It shows how much alcohol (ethanol – chemical compound) content there is in a beverage. The Units utilized for wine volume are the same as some standard volume units such as ounces, liters, milliliters. The names of the containers are also used for units for wine volumes such as glass and bottle.

When it comes to the most appropriate shape for the wine bottle, winemakers follow the tradition of their local areas. The most common shapes are called: Burgundy, Bordeaux, Rhine, Champagne, German, Alsace/Mosel, Chianti, etc. 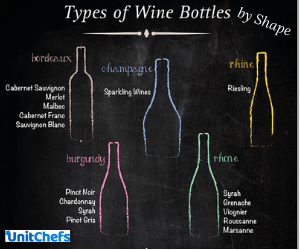 There are several assumptions for the adoption of the 750 ml bottle as a universal standard:

“At the time, vessel capacity was calculated in barrels. A barrel of Bordeaux was 900 liters. If we divide 900 by 0.75 liter, we get 1200, one hundred cases of twelve bottles. As usual, the origin is found in practice. “

The bottle sizes are multiples of the standard bottle of 750ml and here’s a list with the most common names and sizes: