Smoke Points of Cooking Oils And Why They Matter

Smoke Points of Cooking Oils And Why They Matter

When we cook and eat we hardly ever think about the oil we are using and how and why it affects our food and our bodies. Well, some people do. But in general, the details about the properties of cooking oils seem to be elusive or not that important. We all should know more and be mindful of the use of fats and oils in cooking and nutrition as it is in our bodies’ best interest. Here is a quick and basic overview, in case you are already interested. 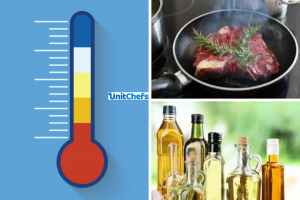 The primary function of cooking oils and fats is heat transfer. It transfers heat to foods and prevents them from sticking. It also retains the heat in food, emulsifies or thickens sauces, and creates a crisp texture when used for frying. When cooking with water (boiling) the maximum temperature which can be reached is 100 degrees C. On the other hand, when cooking with oil the temperature goes higher up to 170 – 220 degrees C depending on the particular oil that is used. Oils refine the taste, along with adding moisture and improving the consistency of the food, and they play a vital role in the efficient absorption of fat-soluble vitamins and not only that. In addition to being an essential nutrient, fat performs a number of culinary functions. It provides a rich flavor and texture. Plus it also carries and blends the flavors of other foods, and makes available to us flavor compounds and nutrients that are soluble only in fat. Last but not least, fat provides an appealing visual effect to food rendering it appear to be moist, creamy, fluffy, or shiny.

Every fat has a smoke point. The smoke point of fats is the temperature at which they start burning giving off smoke. This causes unwanted flavors as well as degradation of nutrients since the oil begins to decompose.

The smoke point varies between different fats and oils, so it would be wise to pick a fat or oil with a high smoke point that is suitable for high-temperature, sustained cooking.

Fat is no longer good for consumption after it exceeded its smoke point and started to break down. This process of degradation means that the nutrients lose their value (they are merely being destroyed) and toxic fumes are released. Decomposition causes some chemical changes, and the release of free radicals, which are harmful to our health. What is probably the worst is that fats even become carcinogenic past the smoke point.

It is generally advisable to avoid frying and cooking at high temperatures or at least it should be done with oils that have a higher smoking point to reduce health risks.

Overall, vegetable oils begin to smoke around 450°F/232°C, while animal fats start to burn at approximately 375°F/191°C. Any additional materials in the fat (emulsifiers, preservatives, proteins, carbohydrates) lower the smoke point; thus refined oils (which are purified, also free fatty acids which cause smoke are eliminated) have a higher burning point. The healthiest fats and oils are usually organic, unrefined, cold-processed vegetable oils but only when used raw and unheated. So, extra virgin olive oil, for example, should be used in salads or to add to cooked foods, but not for high-temperature cooking. While refined oils are considered not that healthy in general, when it comes to deep frying or another type of high heat cooking they are the better choice, as they reach their burning point at higher temperatures.

Cooking food at overly hot temperatures should be avoided as it is likely to cause inflammation in the body and is generally thought to be harmful to the health as it destroys enzymes, nutrients and it produces dangerous compounds. Still, if you need to cook something at high temperatures, beware of the kind of oil you are using.

Suitable for high-temperature cooking is the avocado oil because it has a very high smoke point by comparison to other cooking oils. It will not burn or smoke until it reaches 520 F (271 C), which is ideal for searing meats and deep frying. Another good cooking oil is rice bran oil 495 F(257 C). Here are the smoke points of several commonly used oils: